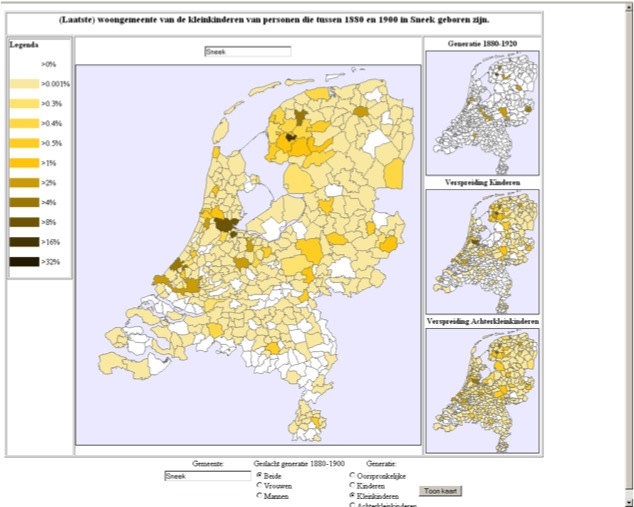 MIGMAP: Detailed interactive mapping of migration in The Netherlands in the 20th century.

MIGMAP is a web application that can show migration flow between Dutch municipalities. The user first chooses generation (forward or backward in time) and gender, while subsequently the migration map of The Netherlands related to an interactively pointed municipality (or other aggregation unit) is shown.

The data underlying the migration maps originate from the first name selection from the Civil Registration, acquired by Utrecht University and the Meertens Institute in 2006. These concern 16 million records from persons with Dutch citizenship, alive in 2006, and in addition 6 million persons deceased before 2006, but mentioned in other records – mainly as parents. The records include identifiers by which family relations can be reconstructed. After considerable efforts in data clearing and reconstruction of older generations, the data provide an almost complete overview of the Dutch population, born after 1930, and a fairly good sample from the period 1880-1930 (>25%). The user will be given options to choose generation (places of birth of the current population, their parents, grandparents grand-grandparents, or starting with the persons born between 1880-1900: the current places of residence of their children, grandchildren), and gender. Each map will be made available as a .csv record with municipality number and percentage as fields, and thus can be used by users in correlation studies with other variables. Utrecht University and the Meertens Institute have the signed permission of the “Basisadministratie voor Persoonsgegevens en Reisdocumenten, The Hague” to use the data for scientific purposes. The migration maps present the data in an aggregated way, and do not violate privacy requirements (no individual can possibly be identified from the maps). However, the underlying data containing information about individual persons and their family relations cannot be made available for reasons of privacy.