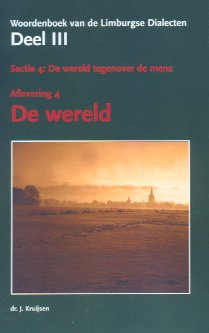 Dictionary of the Limburgian Dialects

The dictionary of the Limburgian dialects, part II (General Vocabulary), abbreviated as WLD, is a semasiologically oriented dictionary. It consists of 14 subcollections, each covering a certain topic. The topics covered are:

Dictionary of the Brabantic Dialects

The dictionary of the Brabantic dialects, part II (General Vocabulary), abbreviated as WBD, is a semasiologically oriented dictionary. It consists of 14 subcollections, each covering a certain topic. The topics covered are:

MIGMAP is a web application that can show migration flow between Dutch municipalities. The user first chooses generation (forward or backward in time) and gender, while subsequently the migration map of The Netherlands related to an interactively pointed municipality (or other aggregation unit) is shown.
In COAVA two sets of databases are made available in a standardized way: one with historical dialect data (the databases WBD and WLD with lexical data of the Brabantish and Limburgian dialect between 1880-1980) and one with first language acquisition data (four databases form the CHILDES project). The databases contain linguistic information (dialect form, standardised form (“Dutchified”), lexical meaning), geographical information (locality, dialect area, province) and information on the source (inquiry forms or monotopic dictionaries and the date of documentation). The visualisation of the first two sets of information will lead to lexical maps. The most typical way for the user to get to the data will be with the use of the browsable concept taxonomy. The databases are, in other words, approachable via search tools but also via a thematic taxonomy. This taxonomy was developed for the dialect databases and covers the general vocabulary.
Gabmap is a free web-based application for dialectometry. It measures the differences in sets of phonetic (or phonemic) transcriptions via edit distance. Gabmap has a graphical user interface that makes string comparison facility available as a web application. This enables wider experimentation with the techniques.
The MIMORE tool enables researchers to investigate morphosyntactic variation in the Dutch dialects by searching three related databases with a common on-line search engine. The search results can be visualized on geographic maps and exported for statistical analysis. The three databases involved are DynaSAND (the dynamic syntactic atlas of the Dutch dialects), DiDDD (Diversity in Dutch DP Design) and GTRP (Goeman, Taeldeman, van Reenen Project).